Multiple charts exist which predict another recession this year! 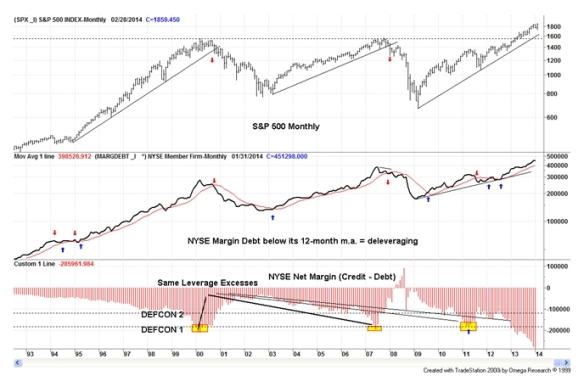 Now, I am normally a very positive person.  In fact my first post for the new year was very hopeful.  But recently I found not one but two charts which show we could have a repeat of the recent Great Recession.

The first chart above shows how the Federal Reserve and Quantitative Easing have allowed Credit to run wild again.  In summary, the Net Margin (Credit minus Debt) is out of control.   For the past year it has risen as fast and to the same level as the year before the 2008 Great Recession.  Daniel Fisher of Forbes reported this as found by Ricardo Ronco of Aviate Global.  Ronco says, “…equities are running away from borrowing levels.”

How do we fix this bubble? We convince the Federal Reserve to issue loans to cities and states rather than financial institutions that only buy stocks and bonds. Cities and states will use the money for infrastructure which will create jobs.

The second chart above shows how the Dow Jones Industrial Average (DJIA) is the same as 1929.   It has followed almost identically as it did in the years leading up to the Great Depression in 1929.

Big name investors like Warren Buffet and George Soros have cut their stock investments or shorted the market.

If another Great Recession occurs, riots will take place that are greater than the Occupy Wall Street demonstrations and President Obama will face impeachment.

Can another Great Recession be stopped?  Yes, the Federal Reserve can take two actions.

2. Stop issuing QE funds to institutions that use “expected rent” as collateral.

You can make a difference by voting for the following White House Petition.

Thanks for reading this.